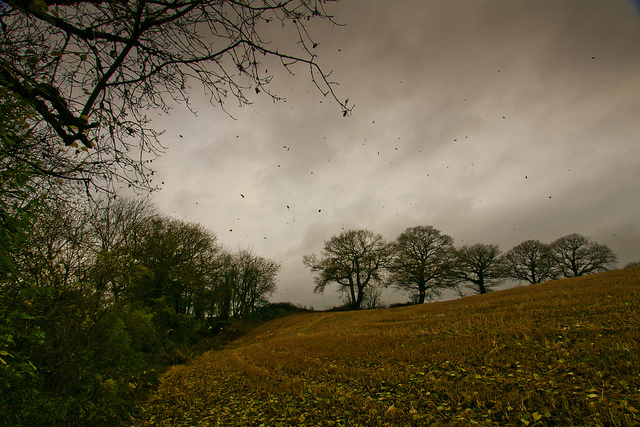 Photo by me. Autumn leaves blow across arable fields from Westhope Wood.

For the last few weeks, we’ve been enjoying the shelter of a restored Tudor Cottage. It is dominated by a large stone hearth built to withstand the winter winds from the North on this ancient river plain. It’s newly installed oil fired central heating system gives lie to our otherwise blunt exposure to the high winds that race down from the precambrian sandstones of the Mynydd Hir, Shropshire’s Long Mynd. Despite radiators, the hearth remains the heart of the house and since we’ve been here, I’ve kept the log fire going longer than I thought I would. Fire is in my blood and the smell of woodsmoke serves to rekindle countless good memories.

Indirectly, the North wind designed this house and its orientation by the applied knowledge of the people who built it. Hearth to the North to fend off the cold, doors and windows to the West for evening light, garden to the south for the longest growing season. Far more trees would have surrounded the cottage at one time, giving rise to further shelter/shade, interspersed with roughly grazed water meadows blushed with the colour of wildflowers in Summer. Now we’re surrounded by vast saturated wheat fields, cider apple saplings by the thousand, and a few lone oaks in the clipped hedgerows. Birds still come and go by the winds that carry them, but not in such great number as they used to. I can see a mutation of fieldfares through the window as I write, and a bevy of mute swans are wintering three fields away.

So wind, from the latin, ventus, is still at work here, as it has been since water formed oceans and dry land baked in our star’s young warmth. Air moves from high to low pressure zones, which are caused by this differential heating of the atmosphere above land and ocean. Air generally moves from polar regions to the equator and from high mountains to valleys, but the very axis of our spinning Earth also plays tricks, causing swirls of moving gas and weather patterns, like hurricanes, that can be seen from space.

Ecologically, wind is an important actor upon species and ecosystems, spanning continents with as much ease as lifting a butterfly. It helps to create waves, salt spray and dunes. Evapotranspiration, plant energy, whisps of dragon’s breath seen above hillside woods, is taken by the winds to fuel our atmosphere. Wind helps to create soils through rock abrasion, erosion, deposition and blowing dead golden leaves to the ground. It acts again by bringing moist air to higher altitudes, where water condenses to precipitation; rains that flow to rivers; snow that flows (more slowly) to glaciers. Wind is the silent partner to flight, the daily medium for birds, moths, beetles, bats. Wind creates or perpetuates ecological damage via storms or chasing fires, from which new life springs forth. Wind disperses pollen, seed, fruits. Wind impacts plants, in either lodging them flat or in deforming growth, dwarfing, cushioning, anatomically cell changing stuff.

We ‘see’ wind as it bends the willows, fills a sail or whips up a dust devil. We ‘hear’ it against the mountain boulders, along a power line or in tiny grains of sand gambolling across a beach in a gust. And yet, without its myriad of interactions, we neither see nor hear it. But it’s important to remember the ecological gifts still brought by the winds. There’s much to be celebrated.

Many cultures across the globe have names and deities in honour of local winds and other climatic effects. Pacific islanders once relied heavily on an intimate knowledge of climate and wind for ocean navigation and migrations, so have them integrated into their culture by place names and folktales. Maori scribes even created genealogical charts of the winds, in Whakapapa tradition of using human kinship as a model to describe the origins of the existence of all nature. Each iwi (tribe) had their own whakapapa.

Over the last few millennia, of course, we’ve learned to harness the winds for trade, Empire and wealth. Then coal and steam, now diesel. And now we are looking at wind as a resource again, ethical storms lashing around the industrialisation of wind as a renewable energy source to meet our increasingly modern requirements, indeed if these requirements, like my oil fired central heating system, are necessary at all.

So the winds are a giver and taker of life, creator and destroyer. Life will have to adapt again to the changes in wind patterns by human induced global temperature and climate change. And wind may be part of any solution.

Meanwhile, I’ll keep lighting my log fire to fend off the Northerlies, will carry on watching fieldfares through the window and smelling the woodsmoke as it wafts around the cottage before we move on to new pastures green.