Natural Capital: ‘Out damn’d spot! Out, I say’ 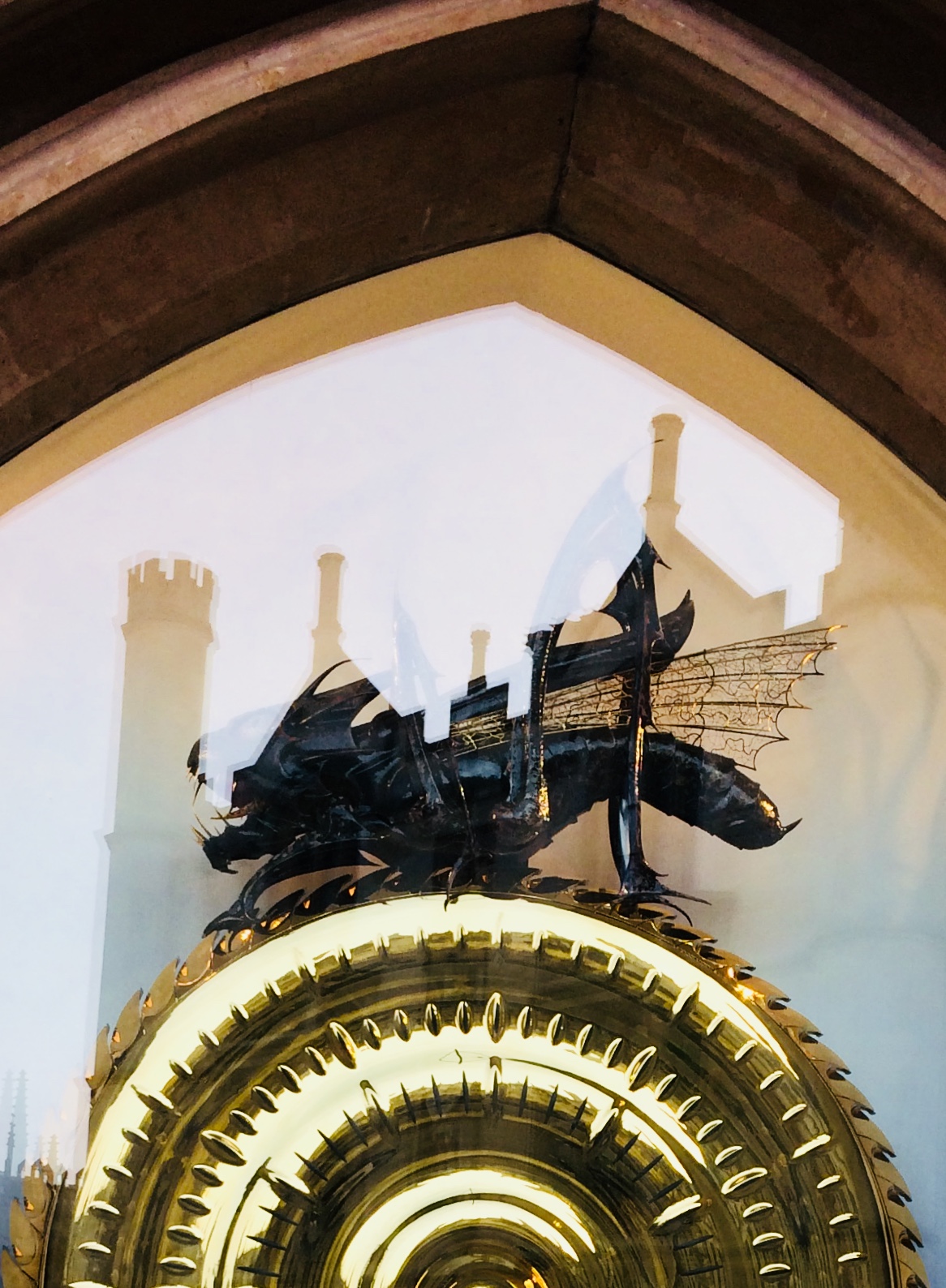 Chronophage, metaphor for time eating, Cambridge. Photo by me.

~~~~~~~~~~~~~~
LADY MACBETH
Out, damned spot! Out, I say!—One, two. Why, then, ’tis time to do ’t. Hell is murky!—Fie, my lord, fie! A soldier, and afeard? What need we fear who knows it, when none can call our power to account?—Yet who would have thought the old man to have had so much blood in him.
William Shakespeare, Macbeth. Act 5 Scene 1
~~~~~~~~~~~~~~
An imaginary blood spot on the hand that can never be removed, with such guilt perceived, admonishable of an awful wrongdoing; of a conscience for procuring the murder, by her husband, Macbeth, of old King Duncan. Surely this is one of the most dramatic of metaphors.

Metaphors can be powerful, no doubt. They linger in the memory. I am writing this imagining Lady Macbeth still trying, dismally, to wash away the stain. And blood stains are the hardest to be rid of.

Metaphors convey a concept easily and succinctly, when the literal meaning, perhaps, needs longer time to explain. But they aren’t normally to be taken literally. It kind of undermines their purpose. So, it was with great surprise to learn this week that some influential advocates of the Natural Capital ethic describe it as metaphor.

The purpose of Natural Capital as an educational tool was emphasised many times by both Tony Juniper and Richard Spencer this week at the Debating Nature’s Value Conference; a device to persuade politicians and global commerce to save nature, money being the native tongue of global capitalism. I have written about this before and I think it is a non-sense.

Explaining the basic tenets of Earth systems thinking can be conveyed in spoken and written word. Education is just that. Education! Global money and legislation are a dominating force, and neo-colonial in effect. But they are both second rate as instruments of sharing knowledge.
If a metaphor fails, then a full explanation can easily follow. What harm done? The Natural Capital ethic ~ an ethic by its own volition detaches humans from nature-belonging as property, externalising, stock and traded ~ includes biodiversity offsetting, banking and trade. It’s been embraced by some landowners and landlords, who of course, benefit from financial bias towards that which (or whom) is already within their posession (private or charitable). Land, of course, is inequitably distributed across the globe and Natural Capital does nothing towards achieving fairer sharing. None-the-less, the approach has rapidly spread through globalised neoliberal economic and political institutions this last few years; hardly a surprise. It’s already a multi-billion dollar industry, part legislated, certainly embedded and networked to the nth degree (the UN and World Bank). The beast is already unleashed. So much for metaphor!

Being at the conference, Anglia Ruskin’s Global Sustainability Institute, Cambridge, it was a positive feeling to be part of a greater union of concerned individuals, rather than in my usual quietude here in Cardiff. All there were people who see Earth Crisis for what it is ~ a real, tangible crisis. Craig Bennett emphased well the ‘ticking clock’ and that the waves of human behavioural change are slower than the changes in earth systems. The chronophage, indeed, looms larger than life. And I call that void in time and human action the Transilience Gap. But discussion of that, in itself, made me feel at home. I felt part of a ‘community.’ It was also vital to hear reflections on long-term prospects; a spectrum of optimism-thru-pessimism, but even the pessimists, including John Foster, seem to have strong hopes of creativity and newness in the face of approaching human demise. I guess you’d call that courage.

Many of the women I spoke to, not least the indomitable Kiwi, Ruth Irwin, agreed that to care for one another and other beings as the storms rage and the seas rise will be one of the greatest acts of humanity ahead of us. That the neoliberal rot has accelerated Earth Crisis means that we have to engage with the 1% too, an unpleasant task for many, and I guess the Natural Capital movement has been trying to do exactly that. As Jenneth Parker so eloquently framed ~ “a bloody great horse tranquillizer.” But it is not going to boot the Anthropocene firmly into the past as a very thin layer of techno-fossils and radionuclides, and as Molly Scott Cato referred, the horrid ground weaver spider is going to have a tough time competing head-on with property developers and cash-strapped councils if reduced to a financial unit.

There also seems a naivety that the creative ambitions of a largely psychopathic elite won’t stop finding ways to exploit all for personal gain; abuses will continue to occur so long as the 99% continue to engage with the current structures of money and power ~ like the Natural Capital movement is doing.

IPBES, and the many scientists who feed their ethical stance, are obsessed by the extrinsic uses of nature by humans for the purpose of protecting and halting its further decline. IPBES has the opportunity to account for pluralistic values and stop the neoliberal colonial stamps of authority across human cultural diversity. But in their adoption of finacialisation of nature, they too are using a blunt instrument, the ‘daisy-cutter’ of an array of educational tools available. How terribly disappointing.

Why is that so few admit the incommensurability of monetary value and so many other values? You can’t have both without accepting monetary value will eventually trump all others in the current economic paradigm. It’s basic axiology! And neither can we pick and choose when and how to apply monetary value, because the advocates of Natural Capital have ensured, emphatically, that the genie is already out of the bottle.

Rupert Read was, and is, absolutely correct ~ the Precautionary Principle can be applied in approaching all. It is already plausible to suggest Natural Capital ethic is not robust enough in every case, failing in application and abused ~ there are dangers. Tony Juniper, currently President of the Wildlife Trusts, himself agreed that it is not always applicable. He was asked on the dilema of defending badgers against culling compared to the livelihoods of farmers. The farmers argue money comes first, and never mind the science or morality of killing a keystone species. To pick and choose? The catastrophe of making things worse for nature, in all time-frames, is a real consideration here.

A metaphor is a device to deliver understanding, plying the memory with powerful imagery that is hard to shake ~ creative and, to some extent, yes, educational. But I say let’s value the value of education, the sharing of knowledge and the humility to accept we do not know all, over the accumulation of wealth for and by the few. Mentor the mentors. Sow seeds of earth understanding and nurture them until they grow to set their own seed ~ a metaphor for life itself.

It is an enormous task, to deconstruct the institutional and cultural pervasiveness of economic neoliberalism. I argue it should now be rapid; an immediate turn to community and localism. Others will maintain that, to keep things orderly, it will have to be incremental. But I cannot see why we can’t be creative enough to be both kind and quick. This system is extraordinarily inequitable and continues to be destructive; a system that has acellerated Earth Crisis, that proliferates arms, and celebrates the fact, as we have also seen this week in Syria.

I feel angry with myself that I have not been able to stop non-human life from being plunged into this same broken system via the vagaries of the Natural Capital ethic. But I have endeavoured with my own research. And others, such as acutely perceptive Sian Sullivan, are doing their utmost to publish their detailed research to highlight the inadequacies. I can’t say I’m ashamed of a government I did not select. I can’t be held responsible for the people who voted for them either. But I can be ashamed that I continue to support the economy, even here in Wales, that props up this broken system. This is the system which widens the poverty gap into a gaping chasm and throws natural interconnectedness, literally and metaphorically, to the wind. Let’s no longer play that game and do something new, and as an expression of love for all life that is interconnected, within and without.

~ Ecoliteracy for all. www.ecoliteracy.org
~ Fluminism
~~~~~~~~~~~
Many, many thanks to all organisers, speakers, artists and attendees, particularly to Rupert Read for inviting me, and to Aled Jones and Felicity Clarke, the Global Sustainability Institute, for being such excellent and informative hosts. I am truly grateful.
~~~~~~~~~~~