There’s a footpath near here, a line first inked on a 19th Century map by an eager railway engineer. It’s the long, straight ghost of The Mid Wales line heading north and south through the village. Running for around 100 years, it was closed some six decades ago by Mr Beeching who had been appointed to rationalise the railways by Transport Minister and Conservative MP Ernest Marples, a road builder.  Familiar story. Now nature is claiming it back.
Where leviathan locos once rumbled along tracks, pulling wax-polished carriages of wide-eyed passengers seated at smoky windows, there is now grass and sedge. Where once was coal smoke, there is now cool, fresh air. Ben trotted ahead in his red jacket, a glowing beacon in dim light, and I followed. The riding is lined either side by young ash and hawthorn, rippling with flocks of house sparrows. Thickets of bramble, holly and hazel are growing strong. An abundance of wildlife have made their home and hunting ground here. I could smell them in the rain.
As I ambled along, the ploughed fields to either side of the path gently fell away, the old track foundations remaining plumb, heading to a mystical point somewhere in a wooded area dead ahead. Heavy labour built this old railway to boost one of the poorest counties of Wales. Now, decades later, it boosts me, my dog and some glorious regrowth. I feel honoured.
Down from beside the village church there is a brook, one of thousands of small tributaries flowing into the River Wye over its 215km journey. I stepped over some fencing and found my way down to a culvert through which this brook gurgles beneath the embankment. I discovered a thing of beauty, a small tunnel of well-hewn masonry crafted to resist tonnes of rock, engineering and the weight of people from above. Yet, simultaneously and unintended, a valuable and wondrous habitat for insects, bats, aquatic species and, potentially, dippers (will check the biological records), as it draws the stream into darkness like an elastic band.
The culvert will need repair sometime in the future. I can see a few of the stone blocks have shifted and cracks have formed in the overall structure. Whoever maintains or insures this defunct railway, its culverts and old bridges I hope will not replace with wildlife deterring smooth tubes of concrete or machined plastic. If we must build, renovate or indeed culvert (if it can’t be avoided), I think we have a moral obligation to extend usefulness beyond our own remit, beyond our use.
Now and into the future. Being mindful of nature is an increasing necessity methinks. Why not in designing, choosing materials, building, repairing….it doesn’t have to cost much, but enough.
Moral obligation….you may hear this again from me in my writing. The detail of managing this obligation is something to be settled, of course, and I hope to explore further.
Ben and I found our way over the embankment to the lower side and traced the re-illuminated stream a few tens of metres to its confluence with a flooded Wye. No signs, no celebrations of this watery union on the river bank, save for a glimpse of pure white snowdrops bursting into flower beneath the waves.  Wonders. 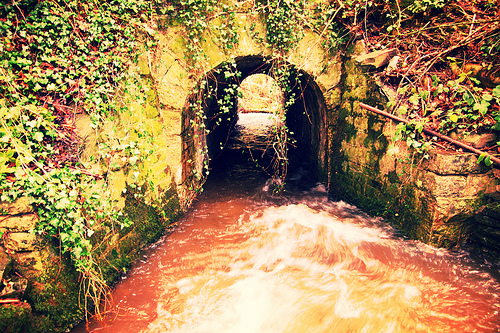