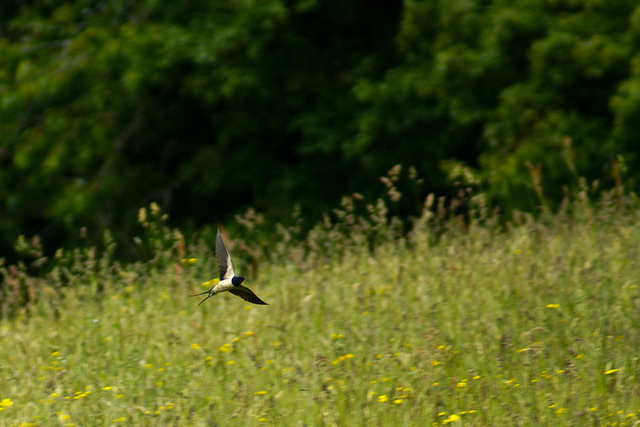 “One swallow does not a summer make, nor one fine day; similarly one day or brief time of happiness does not make a person entirely happy.” Aristotle
I’ve just returned from a short stay on the Channel Islands. We made our sea crossing in a fast catamaran ferry which departed from a distinctly sunny St Helier to a particularly cloudy Weymouth. About mid-journey, mid April, as I leaned on the portside railings to brace myself from high winds, I noticed we had just passed a small sailing yacht also bearing north, bobbing in and out of a medium swell. Just above the inky water, between the two moving vessels, I glimpsed a pair of small dark birds, wing tip to wing tip, flying faster than the yacht and slower than the ferry.
Their flight style, recorded deep in my childish memories of common land and sweet hay meadows, gave their instance away as “barn swallows”, regardless of the unfamiliar backdrop. They were perhaps a little seasonally late in their Northward ventures over crested waves.Their usual glossy feathers were dulled, I imagined, by red Saharan dust.
Breathtaking.
Here were two seemingly fragile passerines determined to cross yet another vast stretch of water, with tiny beating hearts and a heritable timing for their arrival somewhere on British terra firma to nest. I was mesmerized, so happy, but my failing eyesight tracked them for only a minute before losing them as we ploughed on towards Portland rock. I’m unsure anyone else on deck noticed them. Maybe the crew on the bridge.
Migration of whichever species, horizontally, vertically, all around Spaceship Earth, fills me with Carson’s “sense of wonder” and beyond, with empathy and concern for our fellow time travelers . Two little birds out at sea and a massive volume of life all around the planet making tracks.
I noticed the catamaran was throwing up sea spray, which the wind spun into webs by the ton, drifting across the swallows’ path. One of the many unexpected hazards they face. I hoped they coped.
Hope as the plasticity of the mind, the flip side of fear, is all I have.
Much later, by the time I reached home in the Welsh Borders, a few Southern African swallows had already completed their Spring journey; a stunning feat in all manner of ways. They swooped and dived, I do believe, in a “sense of wonder”. Brave swallows, with the hearts of lions.
BTO Spring Migration