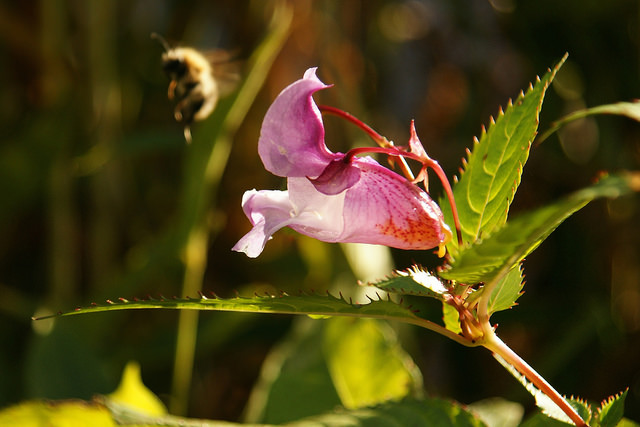 The Impatiens glandulifera, Himalayan Balsam, are strong just now. Each day I wander along the river footpath they appear to glow in robust health, as if securing their non-native position here in the ecological community with a certain joie de vivre. They’ll bloom pink soon among toxic native Water Dropwort, and will nurture numerous bumblebees with late, lush pollen and nectar.

Classed as an invasive alien, I. glandulifera are targeted rigorously by many conservationists in efforts to protect native species. Local provenance is ecologism, whereas Himalayan Balsam are… as it says on the English label.

John Forbes Royle, surgeon for the East India Company and botany collector, first sent the species to the London Horticultural Society in the 1830s and by the 1850s it had made its escape, proliferating along rivers with some spark. Far from appearing a tender sub-tropical plant, it drinks-up our temperate climate.

The plant established itself across the Northern hemisphere in similar Victorian style, as botanical jail-breaker. Scientific research has since investigated causation of its success in Europe, or invasiveness (or however you might describe it) — Key papers centred on experiments in the Czech Republic.

Results conclude it isn’t that great a threat to natives in riparian zones because there are other factors at work keeping the natives away. But there are multiple anthropogenic effects upon the European environment stoking its longevity, which society needs to address; riparian disturbances (agricultural, recreational and soil scouring from increased floods due to climate change), warming of soils and flow from tree clearances (rivers’ natural allies), river eutrophication (nutrient enrichment), supplying potent rocket fuel in its flourishing and encouraging its return even if removed. I’ve seen much of this myself on my familiar stretch of the riverbank.

Via Twittter, I asked the UK’s Centre for Ecology and Hydrology (as Natural England refer advice on removal to their information sheet), what science was used to base recommendations to remove from riverside locations? The answer; “sheet info was based on author first-hand experience.” There seems to be a feeling that the plant shades out competitors rather than moves in as a ‘pioneer’ where competitors have taken a hit from disturbance and human action. This is not hard science and I find this surprising. There’s a different picture in woodland, where impacts over native species are far more tangible and its removal highly recommended.

Never-the-less, I. glandulifera has evolved a ballistic seed distribution mechanism, which adds to its success. Seed capsules explode sending seed spiralling to the shady, damp soils beneath or into the flow, usually in the direction of the prevailing wind. Any attempt to remove the plant during seed dispersal will most certainly secure a fresh crop next year.
No matter the merits (or not), of removal, from seed to stem collapse, each individual plant will know nothing else but this place, right here, beside the river where I walk. Their genetic heritage stems from distant Asiatic mountain river valleys as ours stems from the East African Rift. Yet their, admittedly, shallow roots intertwine with one another as if they’ve inherited Welsh Radnor soils from eternity. This is their ‘place’ right now and they flourish. Do they feel they are indigenous? Do they even discuss it?

This may seem a very odd question, but a plant must surely be conscious of place in some way or another, in order to survive. Science is revealing modes of molecular-speak between flora, intra and inter-species; chemical signals blown in the wind or carried in rain splashes; an exchange of RNA between parasite and host; an underground mycelial wood-wide web. In an Avatar-style turn of events, we’ve uncovered a significant network of non-human consciousness. Some of us consider this scientific revelation simply bonus to what we already felt we knew. But there it is, under the microscope, in a lab and peer reviewed in scientific journals.

Have Himalayan Balsam plants learned to speak a local dialect, or is the language of the plant kingdom universal? I’d like to think there are many messages left in the soils from flora to flora, flora to fauna, and from many previous generations, like love letters or books of ancient wisdom. Perhaps one day, we’ll learn to read them all. What a gift from this good Earth that would be.

As I stand here on the Wye Valley footpath this sunny day, as usual, there are humans gossiping, dogs barking, birds and insects singing in various musical frequencies. The view South across the river remains the same as last year, open skies bringing both strong solar heat and heavy rain from increasingly energetic storms. Quick growing stems suck ground water so fast one can almost hear it, like lemonade up through a straw. The broad, green leaves of I. glandulifera, with their blood-red serrated edges, continue to transpire and output oxygen, and to walk by a stand of fully grown balsam actually feels invigorating.

Maybe, for now, that is just their personal message to me. “Breathe deep”.
—————
An interesting point of view from Richard Mabey, do listen here. http://www.bbc.co.uk/programmes/b012qnl4