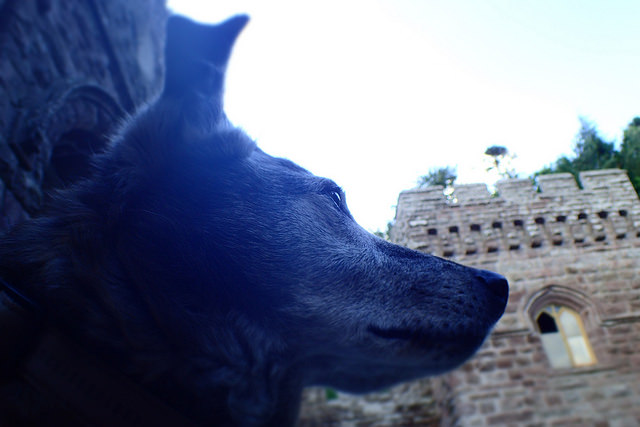 It has been an education living in a castle tower for the last eighteen months. Far from being grandiose, it’s been a small affair, a unit rented from the owners in a scheme of half a dozen, designed to equip them of income into an uncertain future. The costs of maintaining a castle must be great.*
The interior floor area has been tight, bijou, as the agents might describe. One of two small towers to the East of the main building, it’s been converted into two downstairs bedrooms and a high-ceiling living room/kitchen upstairs, with many stone steps in between. I’ve enjoyed the novelty of living here, although sandstone dust turns up in the most unlikely places, and my knees have taken a toll this week in lumping possessions down to an awaiting transit.
We’re leaving, you see, for new adventures. Another journey, another region, one of those switch points to reflect upon the road travelled and the course ahead. I have an array of memory boxes, literally, to either take along or give away. My heart says to keep, my head says to donate.
As a family, we move often, unplanned, but it’s just how things have turned out. Though I dream of living out my greying years in the same, familiar cottage with a chocolate-box garden, work is always there to leverage us out and along the road to somewhere new. Adventures, I am compelled to call them.
Here at the Tower, from my lofty, living room window, Castle Wood stands to the North, a startling skyline of tall canopy, green peaks and troughs. In amongst the branches, red kites, peregrines and buzzards alight, as well as tuneful passerines and agile squirrels. I’ve even seen a goshawk hunting redstarts.
Beneath the wood, across the tarmac, is the other mini-tower, the unconverted twin, with broken windows and a tawny owl sheltering beneath the roof beams. He often embarks on short forays into the soft woodland edge, and I call him Tony. I’ll miss him.
This other tower is like a parallel universe staged for me to observe; converted versus unconverted, present mirrored by the past. Weathering takes its toll on any standing object, even a castle tower made of solid, stone blocks.
Up to the side of the castellated owl-box is a boot-warn path, which we have made ourselves over the course of several months, the best kind of path. Low under the laurels, it climbs up through a wilder patch of recent secondary succession beneath small electric pylons. Eventually, it joins the managed and ‘marked red on the leasehold plan’ route through Castle Wood, which is strimmed relentlessly for the benefit of tenants. I wish it weren’t.
I’m now so familiar with this wood as I wander around with best buddy Ben, my collie-cross. In among a structural framework of native oaks, sweet and horse chestnuts, and beech, there are exotics such as mulberry, gingko, corsican pine, even a giant Californian redwood, and with an understory dominated by even more cherry laurel, rhododendron and green alkanet (flowers of bright blue). If one looks closely at some of the tree trunks, there are initials of Canadian military patients and Land Girls scratched into the bark, and stretched again with growth over the past seventy years. I wonder about these initials, the lives they represent, and their finality. There’s military history here, as the estate was requisitioned during World War II.
As you may have gathered, this is no fully functioning ancient woodland. It’s an island, with more exotics, invasives and human interventions than you can shake a stick at. But there are bats roosting in some of the veteran specimens, dragonflies hunting over a small Victorian reservoir and a number of bumblebees nesting in the ha-ha at the Northern edge.** Nature works its magic.
In the cavernous root plate of a windblown oak (not yet taken for timber, remarkably), hornets have been meticulously building a nest from the multi-tonal and far-flung tree species. I’d say they were at least two weeks crafting this intricate pastel-coloured paper home (a thing of beauty), with nothing more than their own spit and mandibles. A few days ago, they and their nest completely vanished. I’m hoping this was badger or fox rather than estate proprietor or woodland manager. Hornets are the gentle giants of the wasp world, and all they wish to do, just like us, is to flourish. I’ll miss them.
I am suddenly overwhelmed by a sense of grief. Perhaps this isn’t surprising. My late parents’ aged cat, Charlie, a dog-like statesman of a feline, was my treasured inheritance. He thoroughly enjoyed this woodland realm, but he died among the alkanet and bees, and so this was to be his eternal resting place. I’ll miss him.
Perhaps, these emotions are thoughts in process, like the very soils processing beneath my feet. Death and decay generate warmth and nutrients for new life yet to be. Leaving the Wye Valley churns the silt of my own river of time and loss. The mud soon clears with that constant flow of water from higher ground, revealing new woodland and rivers, new friends and, it must be said, the South Wales coast. Coast? Now, that really is going to be an adventure.
There is light.
~~~~~~~~~~~~~
* This current castle is far from ancient, the embodiment of narcissistic forbears of the current proprietors, who brought wealth back from East India only two hundred years ago. They were plant collectors, though not as extensive as that of the Banks of Hergest, Kington.
** It is presumed a very much older manor may have stood in the middle of what is now Castle Wood, with the ha-ha being all that remains.