Mycelium of the forest floor. And love. 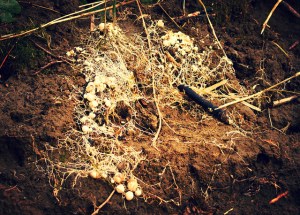 It’s Autumn, and the fungal fruits of the woodland floor appear to resonate more than at any other time of year. To begin to understand fungal bodies and their place within ecosystems, one needs to imagine part of the world beneath the humus and deadwood, where the ‘hyphae’ grow.

These are the living thread-like filaments primed to branch out into multicellular fungus. The resulting mat of subterranean mycelium, interconnecting with various plant roots, is a living gauze, where symbiotic mycorrhizal relationships exist between many forest beings. Think of a mycelium as a layer of blood vessels, keeping shape due to hydrodynamic pressure, with a flow of water and soluble nutrients journeying across cell membranes and the forest floor. Mycelium are the wood-wide web* of woodland community consciousness.

Hyphae grow from their very ‘finger’ tips, the softest exploration in finding a way to their next interconnection. In a lab, the direction of hyphal growth can be controlled by environmental stimuli, such as the application of an electric field. Hyphae can sense reproductive opportunities from some distance, and grow towards them. Hyphae can weave through a permeable surface to penetrate it.

One may consider the human spirit of love a little like the hyphae, in sensing partners and finding ways to connect and exchange through layers. Love itself, of course, glows in many rainbow colours. Aristotle says love is composed of a single soul inhabiting two bodies. Mycelium may be the soul and unity of the forest, where not just two beings are united, but many, and for the love of the whole community.

Consider our spiritual and mental growth, travelling from the outermost reaches of our minds to the tips of our fingers and beyond. From these outstretched fingers, there may come others to warmly embrace and bring substance. Sometimes it takes courage simply to hold out one’s hand, with uncertainty and rejection looming. But when, in the eventual joining of those hands with like-mindedness, there are the deepest existential threads of human happiness (and suffering) to be interwoven.

This Autumn, just when society’s disconnection from itself and from the rest of nature seems to have been framed, yet again, by the overwhelming monetary aspirations of the Conservative Party Conference, one might find remedy in simply observing mycelium.
Rilke says, “to love is good, too: love being difficult”.

My goodness, it can be difficult. And just a little bit scary.

Being in love often takes us beyond comfort, and into the fringes of the unknown. But if we risk nothing, we gain nothing. And the planet is in need of it. There is a contract, however. With love, there is the risk of loss. In union, there are perhaps expectations and subordinations. If we see love, instead, as being something other than union, like the mycelium, a passage of consciousness, love may be THE call to act, and a light shining upon not ourselves but those we love. A selflessness.

I was fortunate to have a brief discussion with philosopher A C Grayling at Hay Festival on the love of nature. I asked him, “can nature, or other living species, ever be our friends?” (I perceive much overlap between friendship and love). He appeared to revel in the question and agreed it is possible, with pets or wildlife. He then went further, to also included dead poets and musicians. There, he lost me. I’m big on metabolism. Some may agree with him. Poems and music may have a kind of lingering metabolism of their own and culturally embody the essence of love.

But to love…. the love of life. All life.

Love has had a tough time. It’s hounded out of politics as weak and sentimental. One could describe the rejection of love as an accumulation through time. It’s a pity. Marxian rejection of love was based on it as subjugating, an opiate for women, an instrument of suppression. We see this in the materialist scientific world too, often, in an over-emphatic obsession with reducing cognitive bias. But to deny love exists is to deny its potential. Look at the woodland floor next time you are there. Touch the leaf litter gently with your fingertips. The Mycelium. And the love.