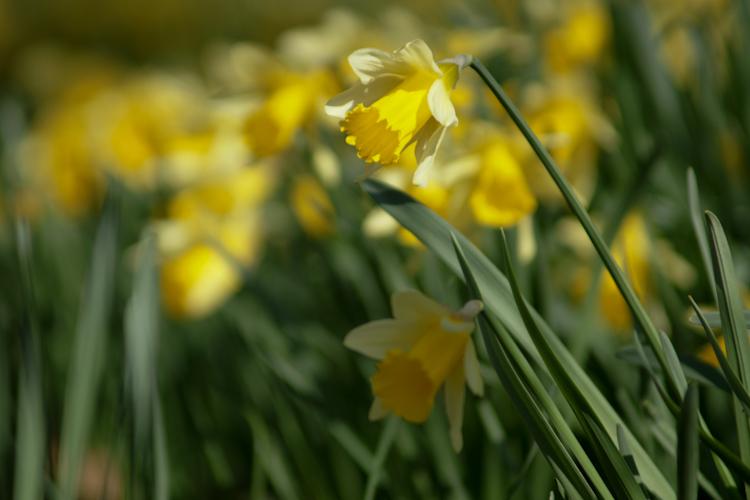 “It had been huddling like an old gray woman
grabbing her shawl, in an underground house,
stirring a promise to return.
Soon its six petals harmonic sense will bring love”.

Britain’s native daffodil, Narcissus pseudonarcissus ssp pseudonarcissus, the Lent Lily, is a tribute to the powers of early Spring. She brings light and gentle movement to the stiller, wetter soils, whilst also foretelling of community, gathering in ‘crowds’ as poet William Wordsworth also witnessed.
The Victorian ‘Language of Flowers’ suggests a daffodil speaks of unrequited love, but I know this not to be true. I feel her generous love, despite other claims. There is a fullness and warmth to it, and I urge others to seek it out, at least once in a lifetime. Relish the glow, with each petal a ray of sun and easy intelligence. Her yellow sparkles will bring you a broad smile.
Once so common, she now survives only in patchy corners of woods, paddocks and orchards, mostly to the West of Britain. Yet, exquisite in her survival of the ravages of modernity, she charges me with a sense of hope. We are far less without hope.
There is a ‘crowd’ of native daffodils I know residing in the hillside hamlet where I grew up. Thankfully, there are still wilder corners of the hill spared from modern human drives for uniformity, though I do worry about the local ‘conservation’ group and their tendency for cutting back and burning. Regardless, the daffodils flower in between expensive properties that were once farm workers’ cottages, and hardcore tracks paving the way for Landrovers instead of work horses and carts. I could take you straight to the spot, under young trees, with enough light on a south facing slope, and enough moisture in short, mossy understory. Above a subterranean swell of bulbs and roots, the small, paler blooms glow to greet us. It’s hard not to lay down in the damp, and listen to their seemingly wide open mouths, corona painted a richer yellow than their petals.
There’s a light breeze flowing through short stalks and grey-green leaves so you’ll have to listen closely….. “love you, love life.”
I’ve stolen some photos, selfishly hoarding them as a reminder for a darker time, to bring me warmth when most needed. It won’t be the full effect, but enough to tip a balance.
In exchange, I write this in honour of our native daffodil, so that we may preserve, cherish and encourage her to flourish in golden crowds. I ask you to rage against anyone trying to harm her. Enjoy her conversation. Most of all, accept her love and the love of her kind. And you might wish to return it, for it’s in giving that joy is really to be found.
For more on UK’s native daffodil, do click through to Kew
~~~~~~~~~~~~~~
[soundcloud url=”https://api.soundcloud.com/tracks/411034746″ params=”color=#ff5500&auto_play=false&hide_related=false&show_comments=true&show_user=true&show_reposts=false&show_teaser=true&visual=true” width=”100%” height=”300″ iframe=”true” /]
~~~~~~~~~~~~~~