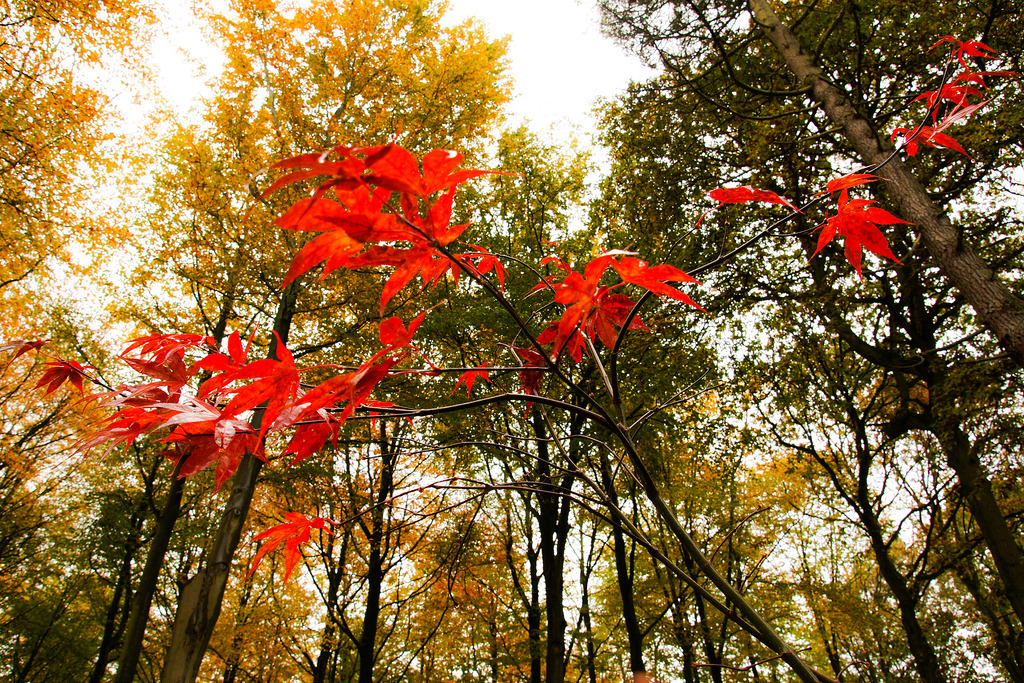 The nights are drawing close here in Wales, and the earliest Autumnal tones cloak the hills to the South West of the city. From my top-floor flat, I have watched the deciduous Leckwith Woods green-up and brown-down. I remember all as a time-lapse scene, though winter is yet to come.

From afar, the hills appear motionless, though shades of brown have turned to bright lime green, darkening to rust and mustard yellows. Wisps of dragon’s breath ~ transpiration ~ sometimes appear, but the skies above are endlessly restless, cloud fronts billowing in kaleidoscope spaces. All forms, at once plump and evanish, clear mostly to the North West. I have become a sky-watcher.

Yes, the leaves are dying. But the trees are not. I am witnessing leaf senescence, the last stage of life leading to the death of the leaf and the birth of the bud. As with all life, through space-time, this a process with purpose, interconnected and rare in our universe. It’s an orderly process too, a sonata with beat and chord progression, ancient music crucial for deciduous plant resilience.

In the sun-months, the leaves of the woodland canopy snatch power from the sun and store it by carbon fixation as sugars and biomass. When the trees are topped-up with all that is needed for winter, every spent leaf becomes a liability. A full solar canopy acts like a vast sail, and as depressions deepen and barometers drop, gales can pull a tree over, worse still, taking others along with it. Before the rapid change of climate, of which we are both perpetrator and witness, temperate zones have been prone to snow, the additional weight a burden to a tree with a large surface area. So the tree sheds its leaves, a teleological response to adverse conditions.

The tiny leaf cells undergo huge physiological, biochemical and metabolic changes, increasing oxidation and hydrolysis of molecules ~ proteins, lipids, and nucleic acids. Hydrolyzed, they are sucked from the leaf into a newly forming bud. More are stored deep down in the roots for next year’s vernal burst of leaf and flower.

The crescendo of yellows and oranges are revealed by the breakdown of green chlorophylls in chloroplasts. The reds are sugar-boosts; the more sugar, the brighter the red. Like a conjurer before an audience, what was always there can now be seen. And we humans find the show an aesthetic wonder, a cultural meme of the season of Fall. Harvest was once the traditional English term. So many of us now live in cities, with produce sold all-year-round, Harvest seems almost obsolete. Yet it really is not. Locally grown, seasonal, organic food is the best. Perhaps, we should consider restoring the name Harvest for Autumn, in a secular sense. It may help in the drive to reconnect our collective psyche with nature.

I wonder what owl makes of Harvest, or fox. Is it time to celebrate the efforts of the sun-months, and hunker down for winter? I think so, for these too are the old human ways. If one is an insect, things might be different. The brighter the leaf colour, the more toxic a threat, a biological theory gaining momentum but not yet at consensus. Up close, within touch, different species track light reflecting from leaves in many different ways. We are the same ~ kin ~ but not the same. The Unity of Opposites lives strong in the woods.
Once the leaves are discarded, hardwood limbs are left naked and rounded, so the Arctic blasts can whip through with minimal resistance. Eventually, the annual symphony of the woods softens to diminuendo and a deep winter silence. There’s more.

Each tree-type has its own structure and cortiform (itself, life-giving), an ethnicity evolved over eons. Water is metered to the risk of frost, and it posseses its very own whip-speed of flex and length of reach. When a woodland is in full succession, and there is an abundant mix of species, each crown sways at its own pace. The intervals and crown shyness allow both room and gentle friction to slow down the movements, reducing the risk of harm in a storm. Between gusts, the canopy quietens, a touch of stillness like the pause between symphonic movements, and the next gust will cue the orchestra to play on. The rippling touch of the crowns, whilst roots and hyphae embrace beneath the soil means the woodland withstands the onslaught. Chemical signals are abound in the air, and it would not surprise me if there’s a collective sigh of relief when the winds eventually die down.

Woodlands are more than food chains, their ecology akin to microbiological holobionts with a collective DNA, a silvis-hologenome. They are community, koinonia, a multi-ethnic group hug. In fellowship, they protect all ages, generate biodiversity and provide resilience in time of great need. A plethora of fluministic waves of life flow in multiple directions and this, I assert, is a vital form of love. Testament to evolutionary co-operation, succession has the advantage of seasonal knowing ~ the woodland ‘knows’ which species grows best, with whom and where. We humans may claim stewardship, but are biased towards our own needs rather than to those of the silvis-hologenome. We’ve poured carbon into the atmosphere and expect newly planted woods to correct our wrongdoings. But when we know only such a small fraction of the complexities of nature, and we plant a forest, we do so largely blind and deaf. I think we need to take a breath. The biosphere is in rapid change, and it may serve us well to remember the value of evolved wildness, adaptation and woodland succession.

Even so, the husk of the leaf will fall in spins and flares, helped by the elements that have pressed and shaped their very existence. On the ground, they become exposed to the living rhizosphere, warmed by the energy exuded by the process of decomposition and decay, consumed and recycled as soils for nursing the next generation from fruits, seeds and nuts. Understanding the microbiology beneath trees has vast potential, but we must be cautious in the aspirations of a corporate agenda to patent nature for profit.

Mixed with crystalline minerals and H2O, the essence of tree will be drawn back through the roots and into the wood-mass for years of growth to come. Such timeworn processes deserve our highest respect. In the city, solitary trees are dysjunct from community, yet they also shed leaves, only for them to be swept or blown away, deemed by insurers as a mere slipping hazard. They are left to grab whatever they can to survive, the carbon we blithely pump into the atmosphere, the minerals from the pavias we lay, and the polluted run-off from our roads and carparks that kill their soils. Surely, we can do more for the trees that bring so much joy, especially in the season of Autumn.

Leaf senescence on Planet Valens ~ such beauty in process, a reflection of season, of our own roots in Harvest, but a resilience of community and exquisite symphony of life flow. We are part of nature, a late edition, and we’ve so much to learn. And at a time when we may need them more than ever, it is prudence to consider, we are all still new to the trees.
~~~~~~~~~~