There once was a time when I was out of my head on benzodiazepines, and as sleepless as the City That Never Sleeps.
Delivered by pumpkin-mice-magic (I can’t remember the car journey), I had found myself at the Cardinal Clinic, Windsor, to be treated intensively for PTSD.

Peak Fall. Crisp, clear days; the birds sang brightly and squirrels danced in the trees. But I could not engage. I could neither look nor listen. Burned into my memory was the vision of my mother, dead from suicide, in a blue nighty I’d bought for her birthday.

My Prince, based at the clinic that was once a King’s hunting lodge, was an ex-Gurkha Regiment psychiatrist. A specialist in trauma, he rescued me with Eye Movement Desensitisation and Reprocessing.

Nothing had felt real. I had dissociated with everyone bar my daughter and dog. But they were far away from me now, protected from my despair.

My body was a blithering, vigilant wreck. Electric-edged dreams woke me at every turn, and in just three months, I’d shrunk, dear Alice-in-Trauma-land, from my usual size 14 to a 10. Everything blue was trigger, even the sky.  I thought I would follow my mother.

EMDR began working, and I found sleep again. There but for the grace of God go I.
I still felt lost and disconnected.

And then, one morning, a Fairy Queen appeared in the group therapy room, like a vision. A therapist in creative writing, she conjured the idea in me that I had a future. She offered me her pen, like a wand.

Only the year before, had we had been living in New Zealand. I cherished my time with my little girl in West Auckland. Whilst my husband worked downtown in an office, we would explore the rich, Waitakere forest, full of birdsong, as it tumbled south to the Munukau Harbour and its northern shores. We’d visit the beaches ~ Armour, Kakamatua, Cornwallis and Huia ~ per chance to glimpse a Maui’s dolphin (we never did).

From high over Whatipu, we would gaze south out over rolling waves; the harbour straights and to the Manukau Heads Lighthouse. As night fell, a strong beam of light reached far out over the Tasman Sea, as if trying to find something lost.

A visit home to my mother for Christmas, and I noticed the light had dimmed in her once sparkly eyes. My daughter, in her arms, put that sparkle right back. There were other reasons too, but we sold-up and arrived back in the UK to help. I was mistaken. I could not help. My mother worsened and she slipped through my fingers. I was devastated.

And so here I was, in a group therapy room with a pen-wand and a blank page.

And I wrote a story, for my daughter, in spider-writing, and I called it The Manukau Light.

Later that day, in front of a raging, log fire, surrounded by sensitive souls, I was asked to read the story out loud. When I was finished, they applauded. And, at once, I felt legitimate, reconnected and safe.

One fellow inpatient, a talented artist, asked me to draw the scene; the waves, the lighthouse and the light. She warmly offered me art materials. So right there, I drew a sketch. She asked if she could keep it. So I gave it to her.

A few weeks later (these things take time), I came home to my little family. My father, still grieving himself, bought each of his daughters an art desk for Christmas. My sister continued to draw until her stroke last year. I illustrated the Manukau Light, for my daughter, then folded away my desk as soon as it was done.

The magic was over, and it was time to continue real life, no matter how hard. And I am still on that continuum.

The Manukau Light?  My daughter loves the story, still, and we hope to publish it one day. Meanwhile, as darkness falls, we imagine the light reaching far over the Tasman sea, at last finding that lost something, after all. 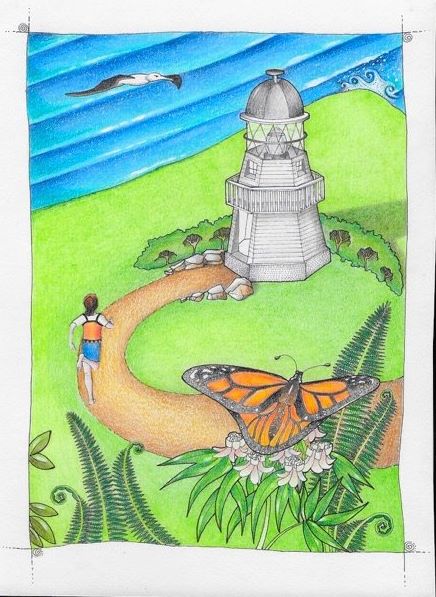 Illustration by me.
(A young girl runs towards a small lighthouse, ferns and a monarch butterfly on milkweed flowers in the foreground).
~~~~~~~~~~~~~~~~~~

~~~~~~~~~~~~~~~~~~
Shirley, my good friend, was a fellow inpatient at the Cardinal Clinic during my stay… she has kindly given me permission to post here.