The Ladybird and the Ring 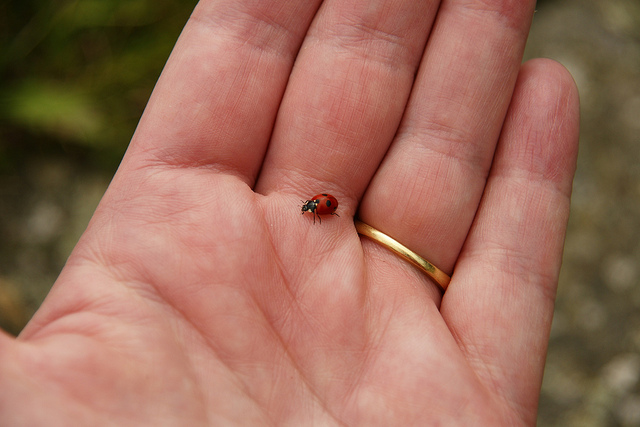 Today is a beautiful day and I hold a perfect Summer gem in my hand. She’s a 5-spot ladybird, Coccinella 5-punctata, flown to me as I perch by the river’s edge watching Ben, our collie-cross, playing in the shallows.
Coccinella 5-punctata are a common ladybird in Europe, but endangered here in the UK. They’re usually associated with river shingle, but I found and recorded a new colony a couple of years ago on a local limestone slab which plunges into the River Wye upstream from where I live. So they are, perhaps, a little more adaptable than at first thought here in the extremes of their comfortable range in Europe.

This little female is a living gem, an invertebrate with eyes and a mouth, a body and legs. Although she could represent an archetype or form of what the word ‘ladybird’ means to us, she is distinct in minute ways from any other female in the species and is certainly not an automaton. She interacts with her environment, taking in oxygen, exhaling carbon dioxide, eating aphids, making choices. She creates a home among the wild chives and thyme, which bind thin soils in the imperfections of the rock. This habitat thrives. It thrives despite an annual torrent of floods punching at the slab and submerging it for days at a time under fast, red silty flow. A male of the species (or two) pursues, mates with her, she lays eggs, they hatch, grow into nymphs and on into adulthood. And the rhythm of it all begins again the following year. This annual heartbeat is part of a wider ensemble, the musicality of ecological longevity.

Wrapped around my ring finger is a band of gold. This was my mother’s wedding ring (I lost mine on a beach somewhere far away). I inherited it after her sudden death. I don’t wear it often, but today it is worn as a reminder of her and that I still love her dearly. When I woke this morning, I had not expected to be seated here by the river with two such valuable things to hand. A ladybird, rare or otherwise, and my mother’s ring, both of which I treasure.
Of course the treasures I describe differ. And I see one as more ‘good’ than the other. I value life.
Value theory, or axiology as the science of value, is a key area in academic philosophy though perhaps itself undervalued by the environmental movement as a whole. The word ‘value’ simply derives from the language of economics and further ‘use value’ divides into two distinct areas, satisfaction and admiration. The smaller teleological group of ethical theories asserts that if an action is ‘good’ in terms of moral conduct it will bring about ‘good’ consequences. The deontological or duty based group would suggest the actions can be deemed good without regard for consequences, like adhering to rules, whether or not the consequences are positive or negative.

Returning to the treasures I have in hand: These are, of course, not actions but objects with differing properties and the things that, perhaps, unite them are that they are both in my hand and that I’ve called them ‘treasures.’ But I interact with them and so it is a good thing to examine the ethics of my consideration of them.

This gold band is something which, without humans, would be largely valueless to all other life on this planet. In theory it serves to enrich human monetary wealth in its mass-production and existence, human aesthetics in its glittering beauty and the value of human relationships in some way through symbolism, giving and receiving. This particular ring is not particularly extraordinary and neither is its history. Other hand-crafted rings may be but this is a mass-produced ring, with gold probably industrially mined in South Africa. If it were injurious in its making, I will never know. That it was my mother’s wedding ring my father gave to her at the particular Church where they are now buried together, means much to me, but perhaps little to you. It was once lost in a garden ash tip and my grandmother found it after hours of painstaking search much to the relief of my mother. So in some way it also reminds me of my grandmother, who I was dearly fond of and whom, it is said, I take after in looks and temperament. It was on my mother’s ring finger when I found her after she had died, so there’s an emotional link remaining, even after much counselling. Once I am done with this life myself, I hope my daughter will have it. Whether she will value it as I do is unknown. Perhaps she will sell it and use the money for a number of things, or experiences (my preferred choice), or exchange it for something else of equivalent economic value. She may even choose to keep it.

A 5-spot ladybird is of absolute intrinsic value to itself, its mates and its offspring. Given ecological homeostatis, it will hold in balance the things it eats and the things that may eat it. As such it benefits the wider biosphere in a small way, the one of course in which we humans are also a part. The instrumental value, extrinsic, use-value of the entire biosphere to human life is where some conservationists focus, as the foundation upon which to build a protection system. “We cannot destroy the biosphere because we rely on it” for our physical, mental and spiritual well being. In other words, we save it for the sake of ourselves. There is one significant failure in this approach, however. It is our species selfishness, or dominion, held over all other life forms and unreliable as a method of protection. It is the same ethic which caused environmental degradation in the first instance. For example, if this tiny ladybird be deemed dispensable in any overall anthropocentric assessment of the state of the biosphere, its extrinsic value falls immediately away. If a species like fox be classed a threat to humans, say via the spread of rabies, human selfishness would allow ourselves carte blanche to eradicate fox. Yet we are unsure just how many individuals, let alone species, life on this planet can do without before catastrophic collapse. We don’t even know the full extent of our impacts to date, let alone predict with any viable certainty what will happen in future. So in terms of the protection of individuals and species, extrinsic valuation of non-human life as first principle is a high risk human strategy, given the pressures also weighing down upon nature from other human demands, such as water and minerals and now climatic change.

Human pluralistic values are unavoidable, inevitable and culturally enriching. To blithely instruct others to dispel their beliefs and value systems I admit is a step too far, even if the intent is good. Better to value those values, encourage new ways of thinking through education, collective and inter-disciplinary discourse, citizenship. Treasuring life in most ways is ultimately going to lead to protection in some form. But with pluralistic value sets there will be priorities of judgment and these will impact outcomes. The problem with money in our capitalist pro-growth economy is that it overrides (often legislatively), pluralistic values. The ultimate questions are what is best for Planet Earth as a whole and are those human actions just? It so happens that what is best for humans will be determined by the health of the planet; there is mutuality.

My reasoned belief is that we are at a point in time when a value shift would enhance the cause for environmental protection. Absolute intrinsic value (even as opposed to relative intrinsic value), is something we cannot let go of completely. The ladybird in my hand is alive, and should be free to flourish. Sentience is hugely important, of course, but not essential for intrinsic value. All life should be afforded similar thought, at the very least. However, our own existence relies on the taking of other life in some form or another, as we participate in food chains and creating our own habitats, just as other lifeforms here on Earth do so.
The question remains, however, how much should or shouldn’t we take? Less is one answer but I will write again about the ‘how much’. For now I suggest we also have to look carefully at moral standing as well as relative intrinsic worth but I would always encourage intrinsics to be somewhere near, if not at, the top of the list. To treasure life is to hold dear, cherish and love unconditionally, without expectation or fear, and we could all be very much more connected to nature this way.