A Tale of Two Rock Doves 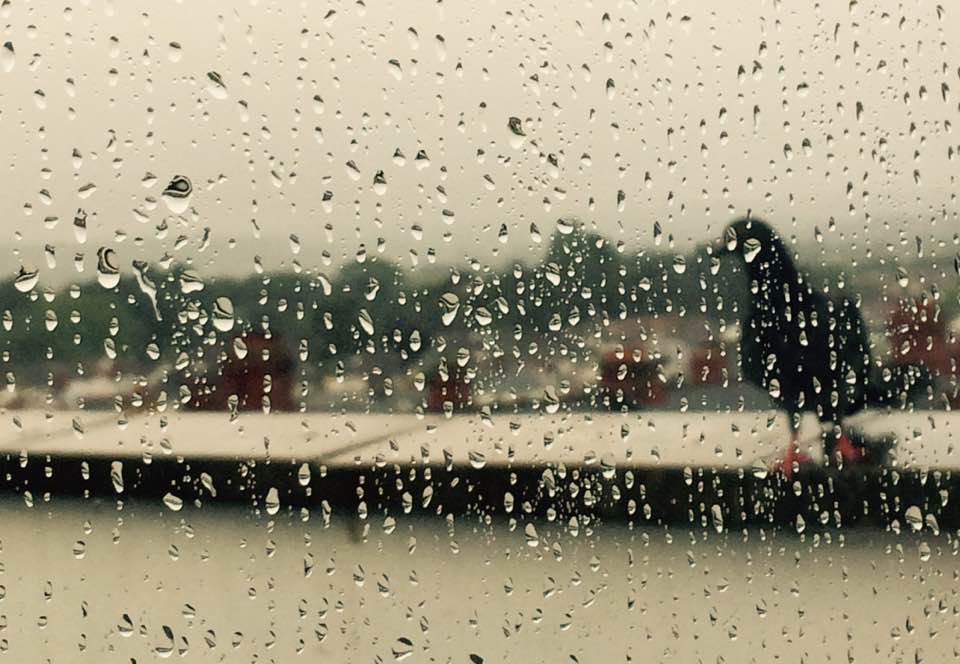 The first day I moved into our new top-floor flat, a poorly rock dove landed on the balcony, waif-like with feathers broken and missing. His chest was nothing more than a wisp of grey smoke. His eyes were dull, and lumpy growths protruded from his matchstick feet. I thought he might die. Then again, I thought I might too.
I was not feeling strong. This was my first step away from married life. We were separated.
My husband flew our daughter to Canada for half term, and Ben-dog stayed with my sister and her husband. The marital home was sold and I was left to handle all. I had sorted, packed, thrown out and recycled. I had cleaned and dusted. I was totally exhausted. I hurt.
Once the hired hands left, hardly a place to stand existed indoors, leave alone sit. Boxes lay deep like a swollen, cardboard river through the rooms, and the sofa stood upended, a bear waiting to hook out some tasty books. The shower was the best place to drink my tea. Last minute, more things had to be stored in a lock-up; extra journeys, extra costs. There was no wi-fi, of course. I found myself outside on the balcony alone, breathing the chilled February air.
As the weak sun fell from the sky, and the lights of the city began to twinkle, my bird landed next to me on the balcony rail. Compassion consumed me. I guess I craved someone to love, to be present, and he needed help.
Somewhere in a kitchen cupboard, hurriedly thrown in the back, was a pot of seeds I use for cooking. I waded through the cardboard river and found them. I sprinkled a few sunflower hearts and pumpkin seeds on to the balcony tiles. The dove dropped from the rail, bounced and hobbled towards me. He was too sick to be afraid and began to peck. He kept pausing to gaze at me, and I whispered to him, “things will be better, I promise.”
Did he trust me? He seemed surprised someone cared. Over the weeks, he returned, sometimes many times each day. I sorted my desk and books, and regained a sense of order, along with caring for my girl once she returned. We made her bedroom cosy, a safe retreat from any emotional turmoil, and she returned to the usual patterns of school and then weekend father-visits. I bought some mixed feed and my bird’s condition improved. His eyes began to sparkle bright orange. His feathers grew neat and tidy, and he preened himself regularly. His chest puffed out with air-brushed greys and his neck shimmered green and purple in the sunshine. My daughter named him Smokey.
One day he flew back with a mate. He took care of her, loved her. It was an honour to watch. My daughter and I delighted in seeing them bond and flourish as a pair. We still do. Their mating rituals are sheer gold. I noticed they started to visit only one by one, and guessed they were nesting. Both males and female rock doves are attentive to their young, feeding and sitting on the eggs, as fair an arrangement of parenthood as ever there was. Down there, somewhere among the slate roofs and brick chimneys, there was a clutch of warm, peeping eggs they had made. It seems I played a small part in a miracle of life, and this still makes me happy. Occasionally, Smokey coos for me, a liquid, loving call. And when I hear him, I find my way to him and we share quiet moments together. There’s no food, just presence. It’s lovely.
I now have a few rock doves visit my balcony, each discernible by their markings and colours. I observe them at rest and in flight. Fat wood pigeons dominate feeding times by savoire faire timing and a dandy stride. Sometimes, I admit, I feel compelled to supervise. I know the gulls and jackdaws too, the magpies and even a leucistic crow, but not as well as my rock doves. I seem to have become just another bird up here in our eagles’ eyrie. I have also seen sparrow hawks riding roof-waves below like albatrosses and watched peregrines patrol the open skies above. I keep a look out.
The second main rock dove of this tale is also a special one. She visits only when there are strong winds and cloud bursts, when the air is so drenched there seems no space even for a fly. She’s tenacious and wise. If I am at home, she knows I will feed her, even in the heaviest of downpours, with no other birds to compete. If I hear tinpany on the roof or the walls in the day time, I look out for her through the glass doors. I call her Angel.
So much is possible.
I’m grateful to Smokey and also to Angel; I think my two rock doves understand. Life’s commonality of need and provision applies to us all ~ people to people, people to pigeons. Pigeons to people. No-one, or life-form, is any different. We are kin and interconnected. It’s agape to feel, and fluminism to participate. My birds are still wild, and I am still Ginny. Divorce has not been the death of me and my bird family have found new energy and rhythms to life.
My daughter says I am the mad pigeon lady. I think I may have been all along.
~~~~~~~~~~~~~