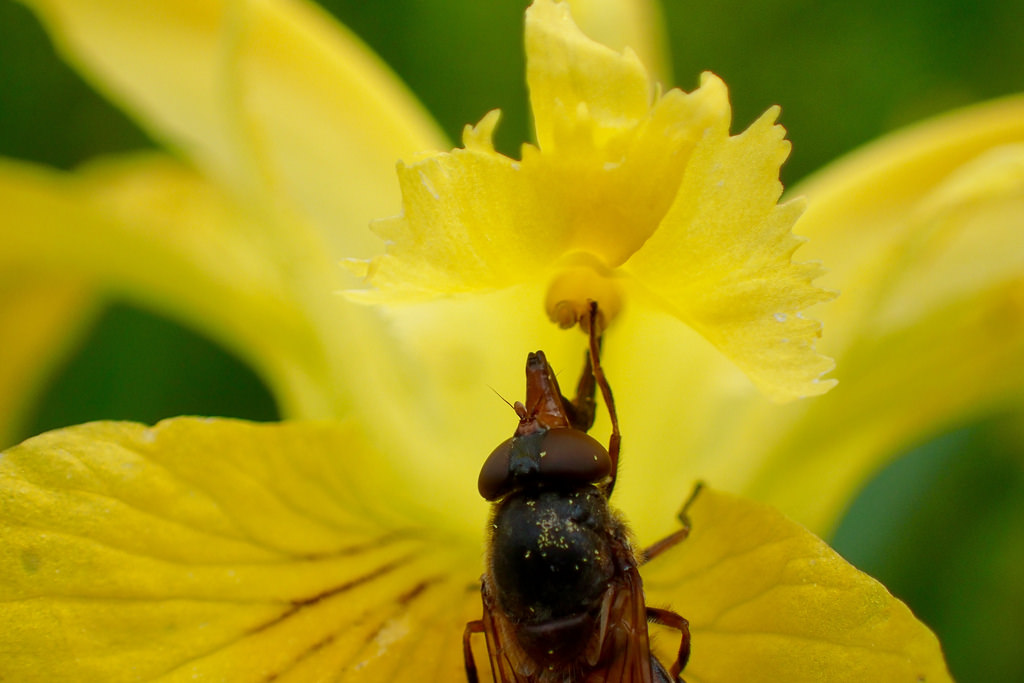 Today, I observed the most intimate union between flower and fly, what we might call the process of cross-pollination, though the words ‘process’ and ‘pollination’ are remarkably poor in communicating the magnificence of what I saw.

Here am I, a giant voyeur, standing in a rhos meadow bristling with life, overwhelmed by curiosity for the behaviour of another. I lean slowly over the scene in hope that I will not disturb.

She, the hover-fly, of the species Rhingia campestris, caught my eye elsewhere, her winged-iridescence registering on my retinal cells with luminosity and grace. My brain is stimulated, deep furrows of experience over decades, to follow her movement through the air. She alights on the signal of a freshly unfurled yellow flag sepal, glowing in full sun. And I am rewarded.
A sense of kinship consumes me. My emotional and rational responses are inseparable. I can’t help but smile.

For a moment, I try to imagine being her, with a conscious detachment from my own sense of self. It’s not easy. I absorb the scale of the huge arc of yellow surrounding me, and the touch of the cool epidermis cells beneath my padded, clawed feet. I carry a few dimpled pollen grains on my back, brushed on by an anther from another iris. They don’t disturb me too much, I’ll maybe flick them away later.

I give up imagining and just observe.

I remember what happened next, as if ripples of sensuous energy are still flowing out from the event and enveloping me. This little hover-fly chose to raise her front legs to the iris anthers, and place her tiny feet on the pollen. She was looking intensely at what she was doing, her long proboscis extending to consume what she had found. The intimacy was so gentle, so loving, a touch that we may not even acknowledge could exist without either imagination or technology. I can only describe it as pure devotion. She spends time, very slowly for a vulnerable fly, exuding devotion.

I can hear the cynical chatter. But yes. Why not?

Her senses are way more luxuriant than our own, her feet are also tongues, with added chemoreceptors enabling her to both touch and taste her protein-rich food. She licks and savours every crum, an evolutionary calling to eat and be healthy.

Chemical molecules from the pollen have contacted her dendrite and neuron cells, sending electrical impulses, like waves, through her nervous system to her brain. She then directs muscles to take action, gently extending her proboscis and salivating to feed. With her soft mouthparts, labella, like two grooved sponges, she soaks nutrition up and into her esophagus. Like us, she enjoys it very much, her reward centres lighting up in her brain. All the while, her eggs will be nourished inside her to be laid in number for the few to flourish.

There’s more. This is the symbiosis of flora and fauna, a miraculous relationship going back fifty million years. Gifts of food are exchanged for sexual reproduction. And it happens every moment of every day, across the globe. Eros lives, and thank goodness for it. I have a basic understanding of the overall sequence of events, but I cannot sense the quantum scale, the electrical depolarisation of atoms in order for cells to communicate. I just have to imagine it, trusting in the science learned from others. Does the fly sense the quantum? She might. If there are beings on this Earth that do,without tools and devices, then they are indeed miraculous and we should refrain from blasting them with toxic sprays in the meanwhile.

The pollen, flower-sperm, on Rhingia c’s back from another flower’s anther will rub against the sticky stigma lip under the petal, as she reaches deeper and deeper for pollen. From this point, germination begins and the microscopic process of double fertilisation is set in motion. More quantum changes are underway.

The quantum and the cosmological, flows of matter and other phenomenon between beings in the Ghedeist, the complex flows of light, water, nutrition, cows, cow pats, neurological electrical impulse, imagination, Rhingia c, cross-pollination, yellow flag, flight, quantum, cosmos, renewal, death… this is the fluminist’s altar. We humans are not the creators. This is the miracle of life itself.

But we have exerted huge and irreversible pressures on this magnificence. We scavenge and parasitise by feeding from the produce of this sublime process, amongst others, but it is the flower and the insect who have evolved together over millions of years in this devoted union. We may well be causing other unions in our ignorance, which may take hundreds of thousands of years to fully take shape. But the fly and the flower exist now. We need to respect them and leave them in peace. We’ve destroyed much, and it has to stop. A critical mass of devotion is needed, previously unknown in human history, as there are now more humans than ever before.

There is even more ~ the trophic function of the flower and the fly. Rhingia c, and even her larvae growing and feeding in cow dung nearby, will also be food for other species. Her existence and death mean they too are able to exist. The illusive spotted flycatcher has flown all the way from Africa to rear her young here and my hover-fly may well end up in their devoted beaks. This devotion, the love for life and living, is a powerful force. There is no doubt in my mind that there would be no life without it. It is ancient ~ a form of love so powerful as to energise evolution. I imagine the story lies deep in the earliest records of life, somewhere, tucked away perhaps, in stromatolites, which supplied Earth with no less than oxygen itself.

Colossal devotion must have existed in the face of all hostility and, as a metabolising strength, within and between us now, and of all living beings into the future. As we move into increasingly turbulent times, the union of the flower and the fly is a devotion of incalculable value, a love, I suggest, worthy of the deepest respect and celebration.