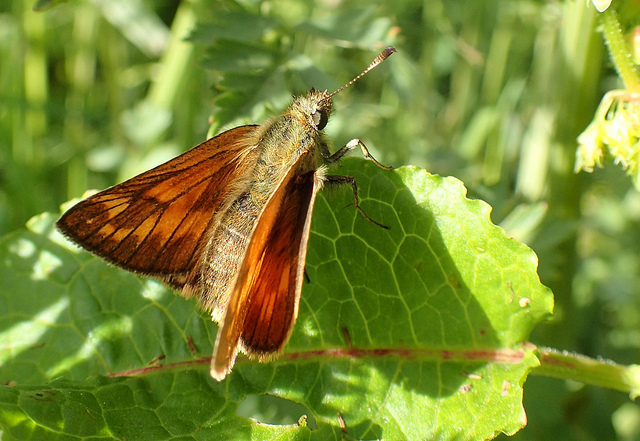 “When one has once fully entered the realm of love, the world ~ no matter how imperfect ~ becomes rich and beautiful, it consists solely of opportunities for love.”
~ Søren Kierkegaard, Works of Love

My walking boots have taken me downstream lately, to several water meadows,
where tall, riparian vegetation and dependent insect life ripple to breezes like shallow, verdant seas. As I kick along deep troughs formed by smaller mammals, Skipper butterflies shimmer forward from their lofty look-outs and out to either side. Before they settle, they tussle for the top spots, as butterflies do whether I am present or not, in an extraordinary aerial display of defiance and speed. I love watching them. I love their tenacity, though they sometimes pay for it in broken wings and missing antennae.

Wabi sabi is commonly interpreted outside Asia as recognition of the value of visual imperfections in the nature of the age-worn, crackleature and objects weathered by the elements. We may find physical deterioration artistically satisfying, joy in the uniqueness of things by their flaws. For example, I once received a brand new picture frame in the post. When I opened the package, the wood was dented, having had some kind of tussle with a mail-train door (I would imagine). I kept that frame rather than return it, admiring the dent as Zen-like and unique, whilst saving logistical resources at the same time. I look at the damage now, framing a print of a snow leopard high on a Himalayan cliff, and smile.

Wabi sabi, as a Japanese aesthetic ideal however, is far richer in meaning than these superficial flaws. The visual cues are a mere scratch at the surface. There are deeper, emotional stirrings in action, and even the Japanese find few words to describe them. “Consciousness transcending appearance”, an acceptance of a form of “atmospheric emptiness”, a wistful mix of loneliness and serenity whilst garnering a sense of “freedom from materialism”. At the same time, there’s an inherent weight or mass in meaning and intent. Wabi sabi may be more of a ‘doing’ word than many might think.

You’ll already know, wabi sabi is not an aesthetic commonly adopted in marketing strategies. We are courted to pay for perfection from an early age. Our faces, our houses, lawns and cars must be in impeccable order, blemishes neither tolerated nor encouraged. Ageing skin or chaos in nature are hard to bear for these gurus with money boxes to fill. Even landscapes are airbrushed, in reality and in symbolism. Foundation creams and herbicides come to our “rescue’ and at a cost (beyond money).

Neither is imperfection the culture of nature photo competitions. A shot of a broken butterfly wing, no matter how atmospheric, would rarely pass first round of elimination. Cherry blossom and autumn leaves might be celebrated, of course, but only in full glory and not when run into a road or pressed into the mud of a woodland trail. Some attention is paid to transience and impermanence, but dying, death and bodily decay are certainly off the menu.

Such a relentless pursuit of sublimity is a competition all life is bound to lose. We are constantly being set up for a fall. Non-human life should not have to measure up to such false, anthropocentric standards. Life is a tussle, and so few are left unscathed. Broken wings and missing antennae are common place. We may love these beings as we love our own, warts and all, for they are our kin.

“Wabi sabi” are two kanji or Chinese characters shared by the Japanese and Chinese language. Originally, wabi 侘 meant ‘despondence’, and sabi 寂 meant ‘loneliness’ or ‘solitude’. These are emotions not portraits or landscapes, vases or tea cups. Ancient Chinese artists and writers ascribed to the aesthetic long before it was brought to Japan via Zen Buddhism and the Tea Ceremony, though classical literature, brush painting and poetry have been key to its development as an ideal and interpretive device.

Whether one is an artist or a lover, mechanic or a parent, we attempt to communicate our personal understanding of such deep, private emotions with the ones we care about. And when we are at our most transparent and authentic, we succeed. This can take courage, of course. Our flaws are perceived by the sensibilities of our patrons and/or loves and, with fortune, are accepted unconditionally. If we fake it, we invite alienation and regret. We can learn to love all imperfections as “rich and beautiful,” and there will be endless opportunities.

Wabi sabi exists of the organic as well as the inanimate. On a dark, rainy day, skippers are subfusc, well on their way to becoming a constituent part of the soils of the flood plain. When the sun shines, they are transformed into brazen flames of orange, flickering and fully alive. Remind me to take beautiful photos of them on those duller days, with their broken wings and missing antennae ~ I will be richer for it, in all that is love and serenity.

2 thoughts on “For the love of imperfection”